Mary A. Bush, DDS:  Dr Bush is an Associate Professor at SUNY at Buffalo School of Dental Medicine. She is Past President of the American Society of Forensic Odontology, is a Fellow of the American Academy of Forensic Sciences, and is Director for the Laboratory for Forensic Odontology Research, University at Buffalo. She is on the Editorial Board for the Journal of Forensic Science, has published numerous articles, has contributed to various textbooks, and lectures widely on the topic of forensic odontology including an invited presentation at a congressional hearing on Capitol Hill. Dr. Bush serves on National Institute of Standards and Technology (NIST) Organization for Scientific area Committees, Odontology Subcommittee. She has also been sought as an expert witness, giving court testimony as well as serving in an advisory role.

Peter J. Bush, BS:  Mr. Bush is Director of the South Campus Instrument Center at the State University of New York School of Dental Medicine and Adjunct Professor of Art Conservation at Buffalo State College. He is a co-founder for the Laboratory for Forensic Odontology Research and a Fellow of the American Academy of Forensic Sciences. He is a member of the Research Committee for the American Society of Forensic Odontology. Mr. Bush has worked in many scientific fields including Forensic Odontology.  He has published over 60 articles and his work is referenced in numerous sources including the NASA website. In addition, he has been a resource for law enforcement in casework and has been a consultant for the NY Times best selling author Kathy Reichs (inspiration for the Fox television show Bones) for her novel 206 Bones. 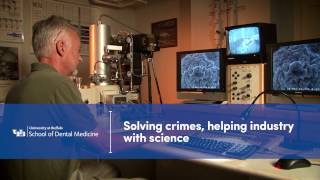 School of Dental Medicine At A Glance

Faculty and Staff: 527 (including volunteers)